Awareness days recognize different populations within the HIV/AIDS community. These days highlight the unique impact on each community. They provide educational opportunities and encourage testing. Become involved in any or all of them! Help increase awareness of the effects of HIV/AIDS within the United States. Keep reading to find a download of these awareness days to keep on your phone or in the home.

HIV/AIDS awareness days recognized in the US

Corresponding with Black History Month, February 7 recognizes Black and African Americans living with HIV/AIDS. It commits to helping end the stigma of this disease. The day aims to increase testing, prevention, and treatment for Black people.1,2Commonly used hashtag: #NBHAAD

HIV is Not a Crime Awareness Day

People in more than 30 states are being imprisoned based on their HIV status. February 28 is a day to recognize injustice and work to modernize, destigmatize, and humanize the relationship between people living with HIV and the legal system.1,2Commonly used hashtag: #HIVNAC

Those living with HIV/AIDS under the age of 25 are recognized on April 10. Around 20 percent of newly diagnosed cases affect this population. The goal is to speak about how HIV/AIDS touches the young adult population. It elevates the work of youth in raising awareness and fighting the stigma.1,2Commonly used hashtag: #NYHAAD

HIV/AIDS affects a significant number of those in the transgender and gender non-binary communities. April 18 encourages regular testing and HIV/AIDS prevention at the local and national levels. There has recently been an emphasis on home testing options.1,2Commonly used hashtag: #NTHTD

May 18 highlights the work toward a safe and effective HIV vaccine. It emphasizes the importance of ongoing vaccine research.2Commonly used hashtag: #HVAD

June 5 recognizes long-term survivors. It is a day to listen to their stories. It focuses on hearing and advocating for the needs of the long-term HIV/AIDS community.2Commonly used hashtag: #HLTSAD

It is critical to know your status to treat and manage HIV/AIDS. June 27 encourages HIV testing across the country. Wide-range testing creates greater awareness. This reduces the stigma surrounding HIV/AIDS.1,2Commonly used hashtag: #HIVTestingDay

In the United States, Southern states have a significant percentage of new HIV/AIDS cases. August 20 encourages testing of those in the South. It brings awareness to HIV/AIDS in this region. It promotes bringing resources to this area to aid prevention, testing, and treatment.1,2Commonly used hashtag:#SHAAD

This day addresses the needs and concerns of HIV/AIDS for gay and bisexual men. Around 1 in 6 gay and bisexual men living with HIV/AIDS go undiagnosed. September 27 encourages conversations to highlight regular testing, prevention, and treatment.1,2Commonly used hashtag: #NGMHAAD

World AIDS Day is celebrated around the globe each year on December 1. While this is an international event, it also spawns many celebrations and fundraisers in the United States. Its purpose is to support people living with HIV and to commemorate those who have died from an AIDS-related illness. It was the first-ever global health day, founded in 1988.3Commonly used hashtag: #WorldAIDSDay 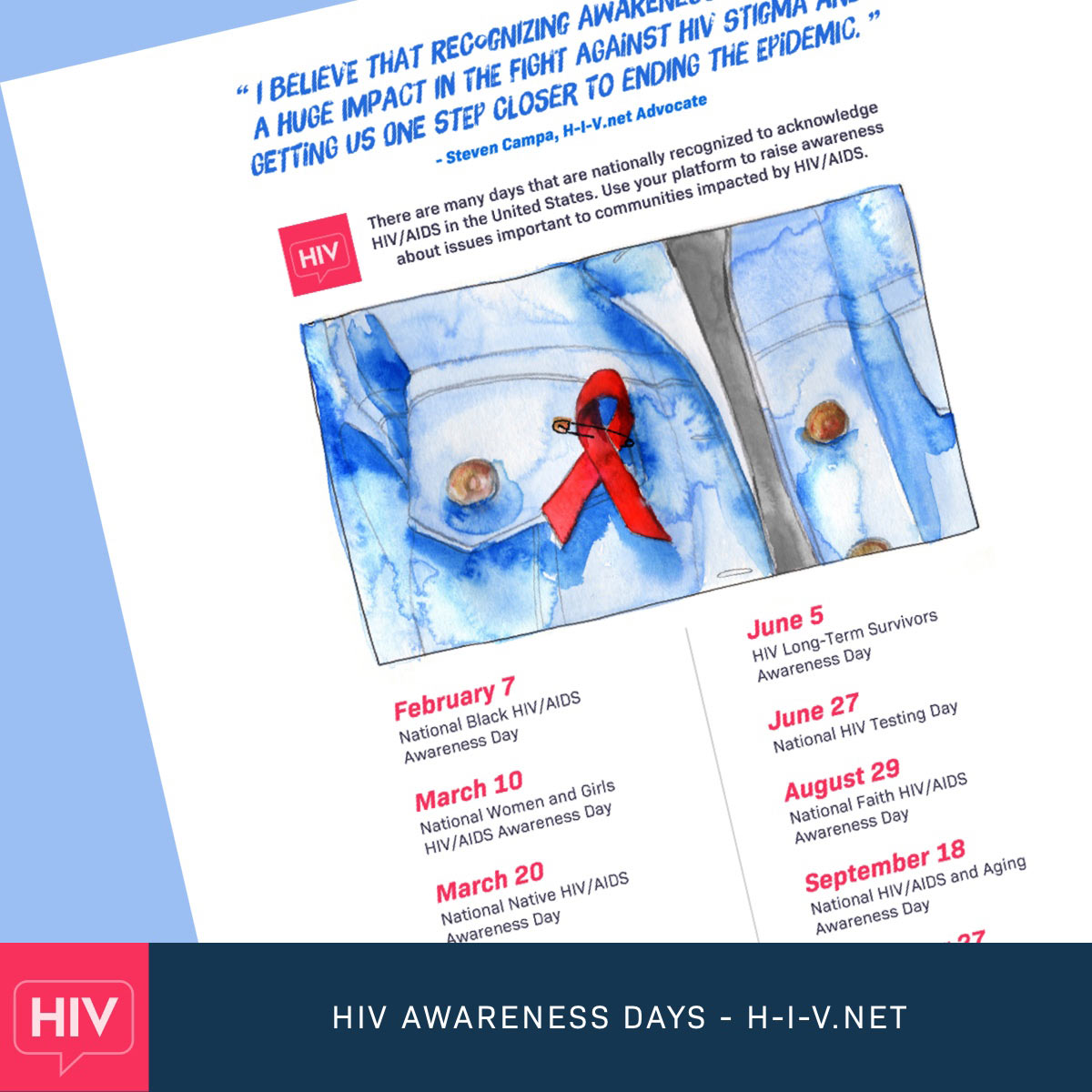 Self-Stigma and How We Talk About HIV