Integrase inhibitors (also called integrase strand transfer inhibitors—INSTIs) are a class of drugs used to suppress HIV in the body. When integrase inhibitors are used in combination with other HIV-fighting medications the treatment regimen is referred to as antiretroviral therapy (ART). Integrase inhibitors act on the integration portion of the HIV life cycle, where the newly-formed viral DNA gets inserted into host cell DNA in order for HIV to carry out the rest of its replication process.

Viruses, like HIV, need human host cells to replicate. They cannot multiply on their own without human cells. When HIV particles called virions enter the body after a transmission event, the next main steps of the HIV lifecycle are as follows: 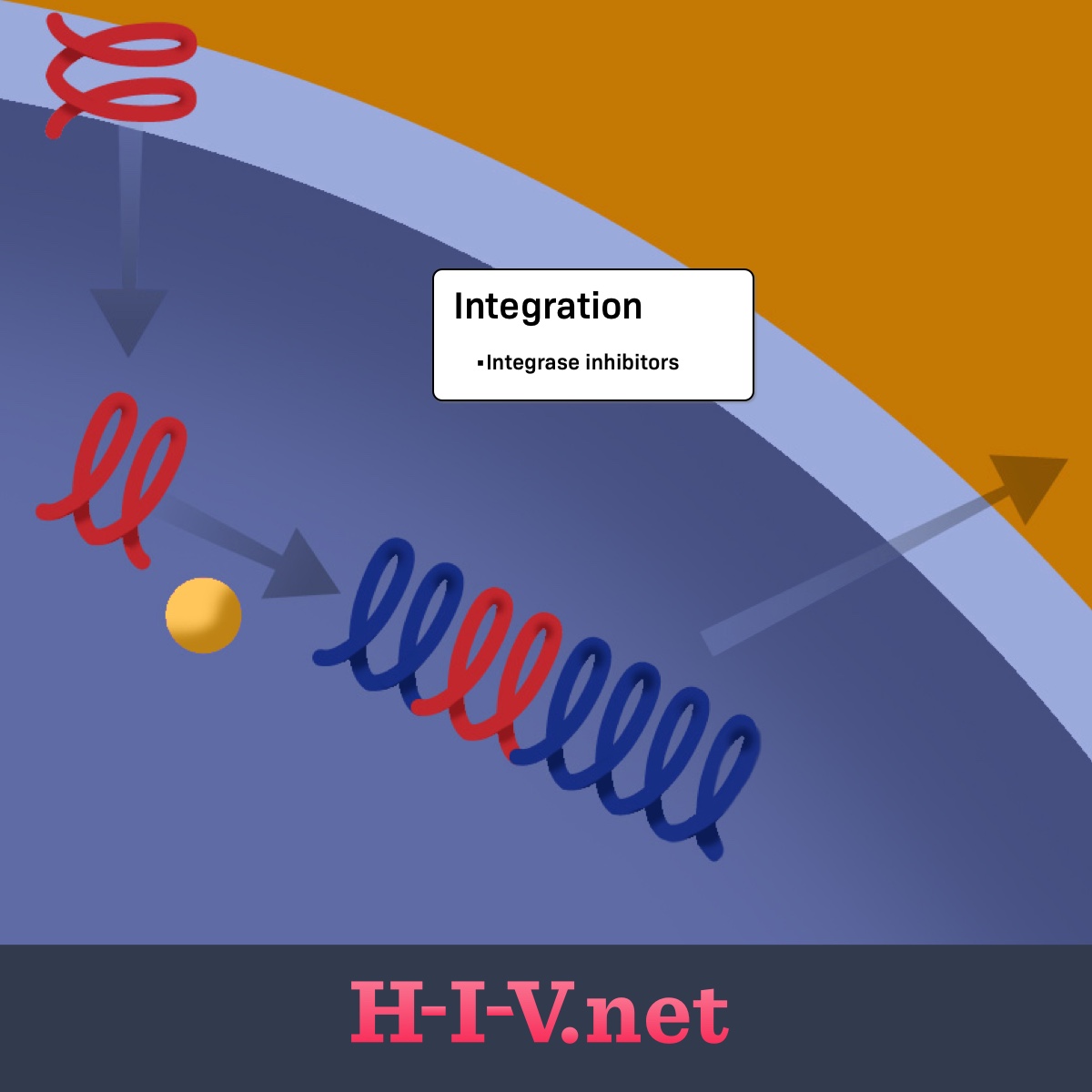 The first two steps of the life cycle focus on HIV getting into a human CD4 cell, or T cell, which is its target cell. Once inside, it needs to disassemble itself and begin the replication process. Normally in our cells, our body converts the information in our DNA to RNA (also called transcription) and then RNA to proteins. DNA and RNA are both forms of genetic material. The HIV virus is able to go backwards through this process to become DNA through a process called reverse transcription. HIV carries around a special enzyme called reverse transcriptase, which allows it to move backwards from RNA to DNA. This special property of HIV is why it is classified as a retrovirus.1

The newly-formed viral DNA can then be inserted into the host cell’s DNA using the enzyme integrase. HIV carries around its own integrase just like it carries its own reverse transcriptase. This integration step is important in allowing HIV to continue to be replicated in its original form with the rest of our normal DNA. Once HIV replicates itself, it can then reassemble into new virion particles that get released out of the cell and back into the blood stream, to infect new CD4 cells.1

HIV uses its reverse transcriptase enzyme to build a strand of DNA from its original RNA form. The enzyme integrase inserts this newly-formed DNA into the human host cell’s genetic material. This allows HIV to be actively replicated with the rest of our DNA as our cell carries out its normal functions. Alternatively, HIV can hide out in our DNA and be relatively inactive once it’s been incorporated into our CD4 cells’ DNA. This characteristic of HIV is one of the reasons why it is so hard to cure HIV.

Research efforts in recent years have been focused on finding HIV that’s inactively hiding in our cells and eradicating it, to achieve a complete cure.2 However, in the meantime, integrase inhibitors can be used to block the integrase enzyme and prevent the further integration of HIV DNA into our host cells. If HIV’s DNA cannot be inserted into our host cells’ genome, the virus cannot continue to be replicated, assembled into mature virus particles, and released into the blood to continue infecting other cells.1

Things to note about integrase inhibitors

Some integrase inhibitors may have significant drug interactions, and should not be taken alongside certain medications. Your doctor or healthcare provider will provide you with information on what issues you may be at risk for based on what integrase inhibitor you are taking, and what other medications you should avoid.5,6