NRTIs (nucleoside reverse transcriptase inhibitors) are a class of drugs used to suppress HIV in the body. When NRTIs are used in combination with other HIV-fighting medications the treatment regimen is referred to as antiretroviral therapy (ART). NRTIs act on the reverse transcription portion of the HIV life cycle, where the virus transforms itself from RNA to DNA inside human host cells in order to carry out the rest of its replication process. 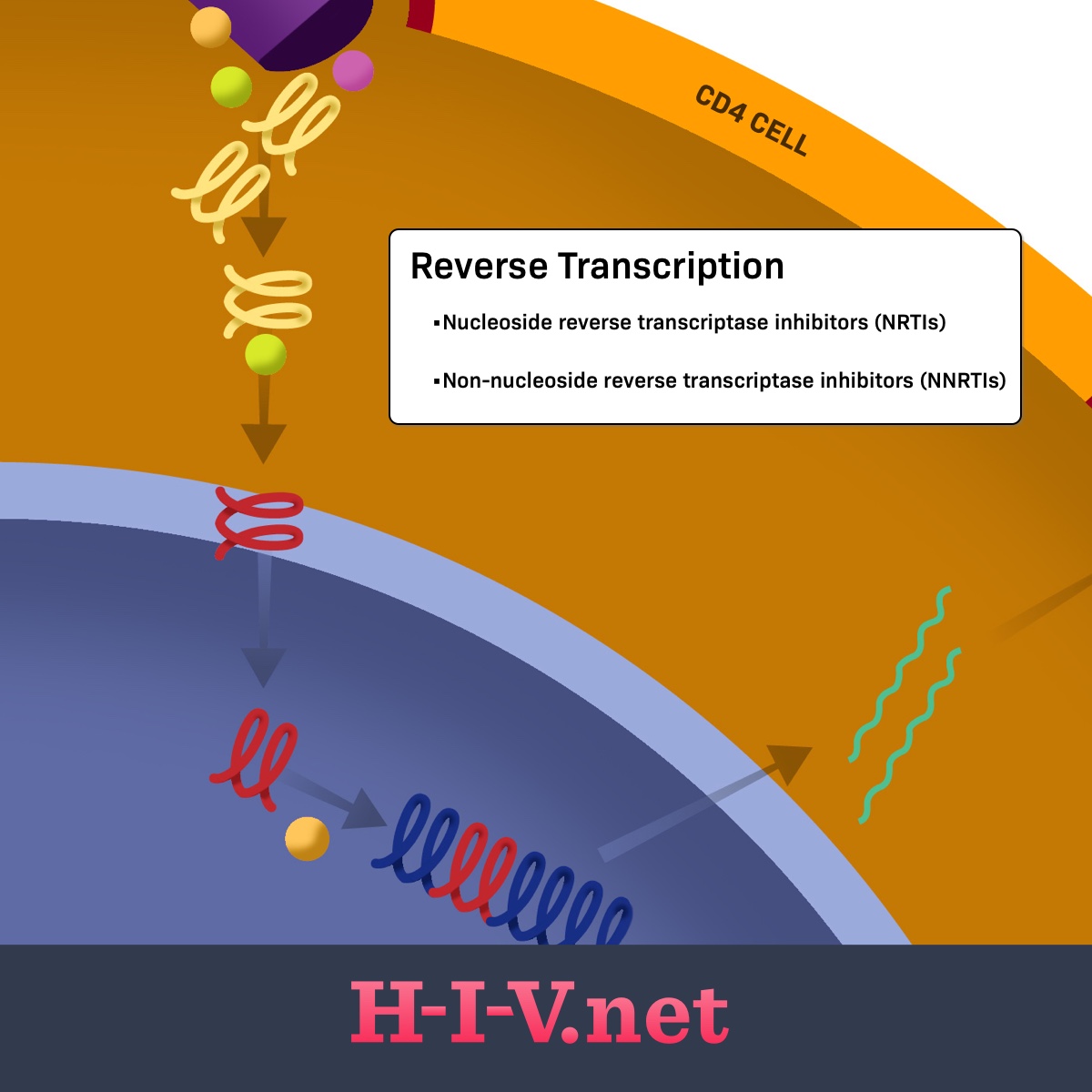 The first two steps of the life cycle focus on HIV getting into a human CD4 cell, or T cell, which is its target cell. Once inside, it needs to disassemble itself and begin the replication process. Normally in our cells, our body converts the information in our DNA to RNA (also called transcription) and then RNA to proteins. DNA and RNA are both forms of genetic material. The HIV virus is able to go backwards through this process to become DNA through a process called reverse transcription. HIV carries around a special enzyme called reverse transcriptase, which allows it to move backwards from RNA to DNA and insert into the host cell’s DNA so that it can continue to be replicated in its original form with the rest of our normal DNA. This special property of HIV is why it is classified as a retrovirus.1

Once HIV replicates itself, it can then reassemble into new virion particles that get released out of the cell and back into the bloodstream to infect new CD4 cells.

The purpose of NRTIs is to stop the reverse transcription process. Normally, HIV uses its reverse transcriptase enzyme to build a strand of DNA from its original RNA form. In order to do this, it uses genetic building blocks called nucleosides that come from the host cell. These nucleosides are strung together one at a time, like beads on a string, to create the final DNA product.

NRTIs act as nucleoside mimics that stop the DNA-building process. NRTIs look like normal nucleosides, except they’re missing a special chemical group on one side. Without this group, the reverse transcriptase enzyme is unable to attach more nucleosides to the chain after them. This prevents the full string of DNA from being formed, preventing HIV RNA from making it all the way through the reverse transcription process and into host DNA for further replication.2

Things to note about NRTIs

Certain NRTI medications may carry their own specific risks. For example, some may increase an individual’s risk of liver problems or lactic acidosis (the dangerous buildup of lactic acid in the blood). Some may have an increased risk of severe allergic reactions.

NRTIs may also cause a condition called IRIS (immune reconstitution inflammatory syndrome). IRIS occurs when an individual’s immune system gets stronger after being weak, and responds aggressively to previously hidden infections. This heightened response may make the person fighting the infection feel worse. Your doctor or healthcare provider will provide you with information on what issues you may be at risk for based on what NRTI you are taking.4-8