Protease inhibitors (PIs) are a class of drugs used to suppress HIV in the body. When PIs are used in combination with other HIV-fighting medications the treatment regimen is referred to as antiretroviral therapy (ART). PIs act on the assembly portion of the HIV life cycle, where the virus reassembles itself into new, mature HIV virus particles after replication. PIs prevent these new, replicated, mature viruses from fully assembling and infecting new cells to start the process over again. 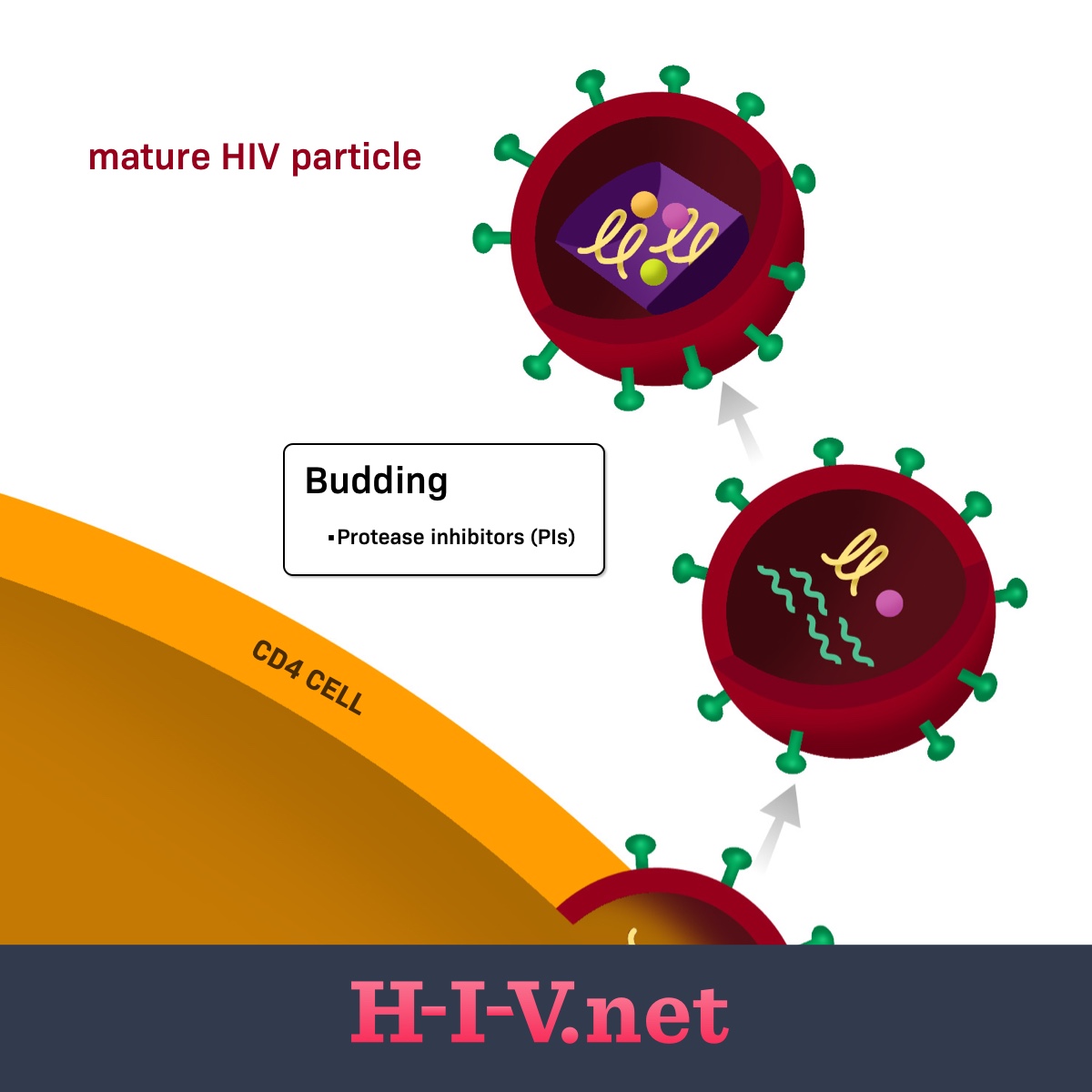 The first two steps of the life cycle focus on HIV getting into a human CD4 cell, or T cell, which is its target cell. Once inside, it needs to disassemble itself and begin the replication process. The next three steps represent the replication process of the virus’s genetic material. The last two steps of the process involve HIV re-assembling itself into new, mature virions that can be released from the CD4 cell and enter the bloodstream where they can go on to infect new cells. Fully formed HIV carries around with it its viral RNA (its genetic material) and several enzymes, including the reverse transcriptase enzyme, the integrase enzyme (both involved in replication), and the protease enzyme. An HIV virion is not considered complete and able to infect more CD4 cells without all of these components.1

Messenger RNA (mRNA) is used to create proteins, including the enzymes HIV virions carry around with them in order to live. During the process of converting mRNA into these proteins, the virus uses its protease enzyme. The protease enzyme cuts the mRNA into sections that will eventually be turned into the different proteins required. PIs inhibit this protease enzyme and prevent it from cutting the mRNA into its different parts. Without this cutting, or cleavage, of the mRNA, the final protein products aren’t able to be made. A mature HIV virus cannot be assembled without these proteins, and therefore, HIV replication and spread is stopped when PIs are used.2

Things to note about PIs

Certain PI medications may carry their own specific risks. For example, some may increase an individual’s risk of liver problems, rash, skin reactions, or heart rhythm issues. Others may cause kidney stones, gallbladder issues, high blood sugar (hyperglycemia), inflammation of the pancreas (pancreatitis), and changes in body fat.

PIs may also cause a condition called IRIS (immune reconstitution inflammatory syndrome). IRIS occurs when an individual’s immune system gets stronger after being weak and responds aggressively to previously hidden infections. This heightened response may make the person fighting the infection feel worse.

Some PIs may have significant drug interactions, and should not be taken alongside certain medications. Your doctor or healthcare provider will provide you with information on what issues you may be at risk for based on what PI you are taking, and what other medications you should avoid.4-9