There are several different types of drugs, referred to as drug classes, that are used to treat HIV. Each of these drugs act on a different portion of the HIV life cycle in order to prevent the virus from completing its replication and maturation process.

Overview of the HIV life cycle

HIV is an RNA-containing virus (ribonucleic acid, a type of genetic information) that infects CD4 cells in the body. CD4 cells are also referred to as T-helper cells and are important cells in the immune system that help our bodies fight off infection.1 HIV needs human CD4 host cells to replicate and cannot multiply on its own without them. When HIV particles, called virions, enter the body after a transmission event, the next main steps of the HIV lifecycle are as follows: 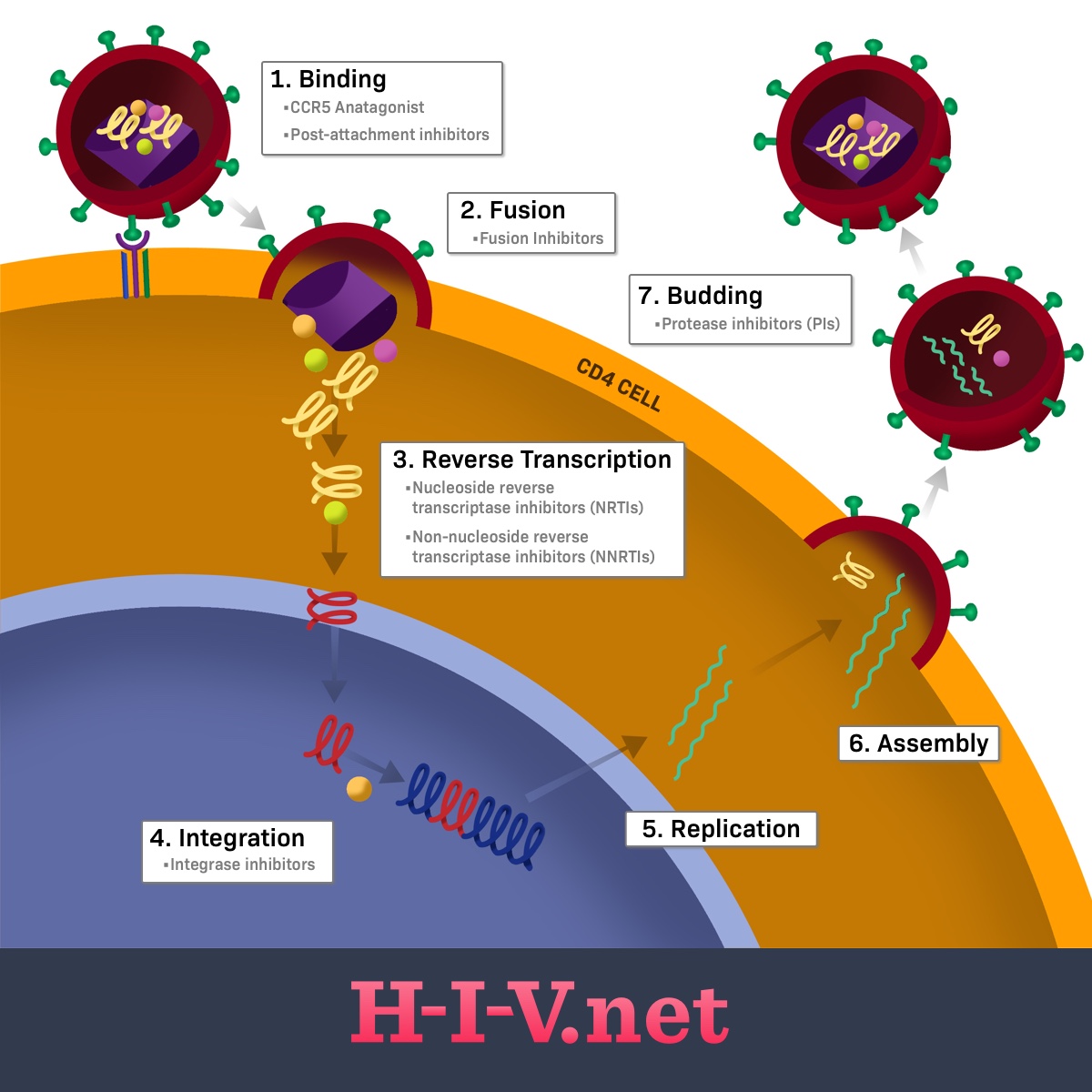 The first two steps of the life cycle focus on HIV getting into a human CD4 cell, or T-helper cell. Once inside, it needs to disassemble itself and begin the replication process. The next three steps represent the replication process of the virus’s genetic material. These processes are called reverse transcription, integration, and replication.

The last two steps of the process involve HIV re-assembling itself into new, mature virions that can be released from the CD4 cell and enter the bloodstream where they can go on to infect new cells. Fully formed HIV carries around with it its viral RNA (its genetic material) and several enzymes, including the reverse transcriptase enzyme, the integrase enzyme (both involved in replication), and the protease enzyme. An HIV virion is not considered complete and able to infect more CD4 cells without all of these components.2

Several classes of HIV medications in order of the life cycle steps they target include:

CCR5 antagonists and post-attachment inhibitors block the CCR5 and CD4 receptors (respectively) on the outside of CD4 cells. The CCR5 and CD4 receptors are involved in the binding of HIV to its target cell. HIV needs to bind using these receptors in order to move on to the next step in the life cycle, fusion and entry into the cell. When these receptors are blocked, the replication process is stopped, since HIV cannot enter its target cell to continue its life cycle.

Fusion inhibitors bind to the gp41 protein on the outside of the HIV virus. Gp41 is involved in the physical merging of the outsides of the virus and CD4 cells, allowing HIV to get inside the host cell. This blending and absorption of the HIV virus is called fusion. By blocking gp41, the main protein involved in this process, the fusion process is prevented or inhibited. Fusion inhibitors are different from CCR5 antagonists and post-attachment inhibitors in that they block the step after binding, fusion. When using a fusion inhibitor, an HIV virion is allowed to physically link to a CD4 cell; however, it cannot fuse with the host cell and get inside.

NRTIs act as nucleoside mimics that stop the DNA-building process. NRTIs look like normal nucleosides, except they’re missing a special chemical group on one side. Without this group, the reverse transcriptase enzyme is unable to attach more nucleosides to the chain after them.

After HIV RNA is reverse transcribed into newly formed DNA, it gets integrated into the host cell DNA using an enzyme called integrase. This allows HIV to be actively replicated with the rest of our DNA as our cell carries out its normal functions. Integrase inhibitors can be used to block the integrase enzyme and prevent the integration of HIV DNA into our host cells. If HIV’s DNA cannot be inserted into our host cells’ genome, the virus cannot continue to be replicated, assembled into mature virus particles, and released into the blood to continue infecting other cells.

If the virus is able to make it through the reverse transcription process and get inserted into host DNA, it can be made into a type of genetic material called messenger RNA (mRNA). mRNA is used to create proteins, including the enzymes HIV virions carry around with them in order to live. During the process of converting mRNA into these proteins, the virus uses its protease enzyme. The protease enzyme cuts the mRNA into sections that will eventually be turned into the different proteins required for new, mature viruses to form. Protease inhibitors block this protease enzyme and prevent it from cutting the mRNA into its different parts. Without this cutting, or cleavage, of the mRNA, the final protein products aren’t able to be made, and a mature virus cannot be formed and released into the blood to infect other cells.

Pharmacokinetic enhancers don’t directly target and treat HIV. Instead, they inhibit an enzyme in the human body called cytochrome P450 3A4, also called CYP3A4. Normally, CYP3A4 helps break down drugs and other molecules in the body so that they can be eliminated. Drugs that get broken down, or metabolized, by this enzyme are prevented from staying in the body for too long.

However, when CYP3A4 is inhibited by a pharmacokinetic enhancer, it allows for the normal drug targets of this enzyme to continue to exist and work in the body beyond what’s normal. By preventing the breakdown enzyme from doing its job, the concentration and efficacy of other drugs, specifically protease inhibitors or integrase inhibitors, may be increased.2,3

Common pharmacokinetic enhancers include, but may not be limited to: