HIV is an RNA-containing virus (ribonucleic acid, a type of genetic information) that infects CD4 cells in the body. CD4 cells are also referred to as T cells, and are important cells in the immune system that help our bodies fight off infection.1 As HIV progresses, the number of CD4 cells within the body decreases. The lower the number of CD4 cells (also called a CD4 count), the more susceptible an individual is to serious and life-threatening illnesses, including infections and certain cancers. If HIV is not treated and continues to progress, it may lead to AIDS.

How is HIV transmitted?

HIV is transmitted via infected bodily fluids. These fluids must come into contact with a non-infected individual’s mucous membranes or through a break in the skin (such as contact with an open wound) to have a chance of transmission. Mucous membranes include the inside lining of the vagina, anus, penis, mouth, eyes, and nose.1

As mentioned previously, HIV can be transmitted through contact between broken skin or open wounds with HIV-infected blood or bodily fluids. This means that HIV, in theory, could be transmitted during open-mouth kissing in which open sores are present in or around the mouth, or if there is any blood present (such as bleeding gums).

However, it’s important to note that HIV is not spread through casual contact, including, but not limited to, closed-mouth kissing, shaking hands, hugging, or on toilet seats. It is also not spread through the air, water, food, or via insects.1

Can HIV live outside the body?

Some viruses, especially viruses that cause the cold and flu, can live on surfaces for days and still be infectious. This is not the case for HIV. Even in very precisely controlled laboratory conditions with large amounts of infectious HIV particles, the virus does not live for more than a few hours outside of the body. In realistic conditions outside the laboratory, HIV is not expected to live for long at all, making environmental transmission outside the body virtually non-existent.3,4

The only exception to this is needle sharing. Depending on where infected blood may be within a needle, the virus may be able to live for several weeks if under the right conditions and not exposed to air.1 This is why needle sharing at any time, regardless of time since the last injection, may be risky.

Viruses, like HIV, need human host cells to replicate. They cannot multiply on their own without human cells. When HIV particles, called virions, enter the body after a transmission event, the next main steps of the HIV life cycle are as follows: 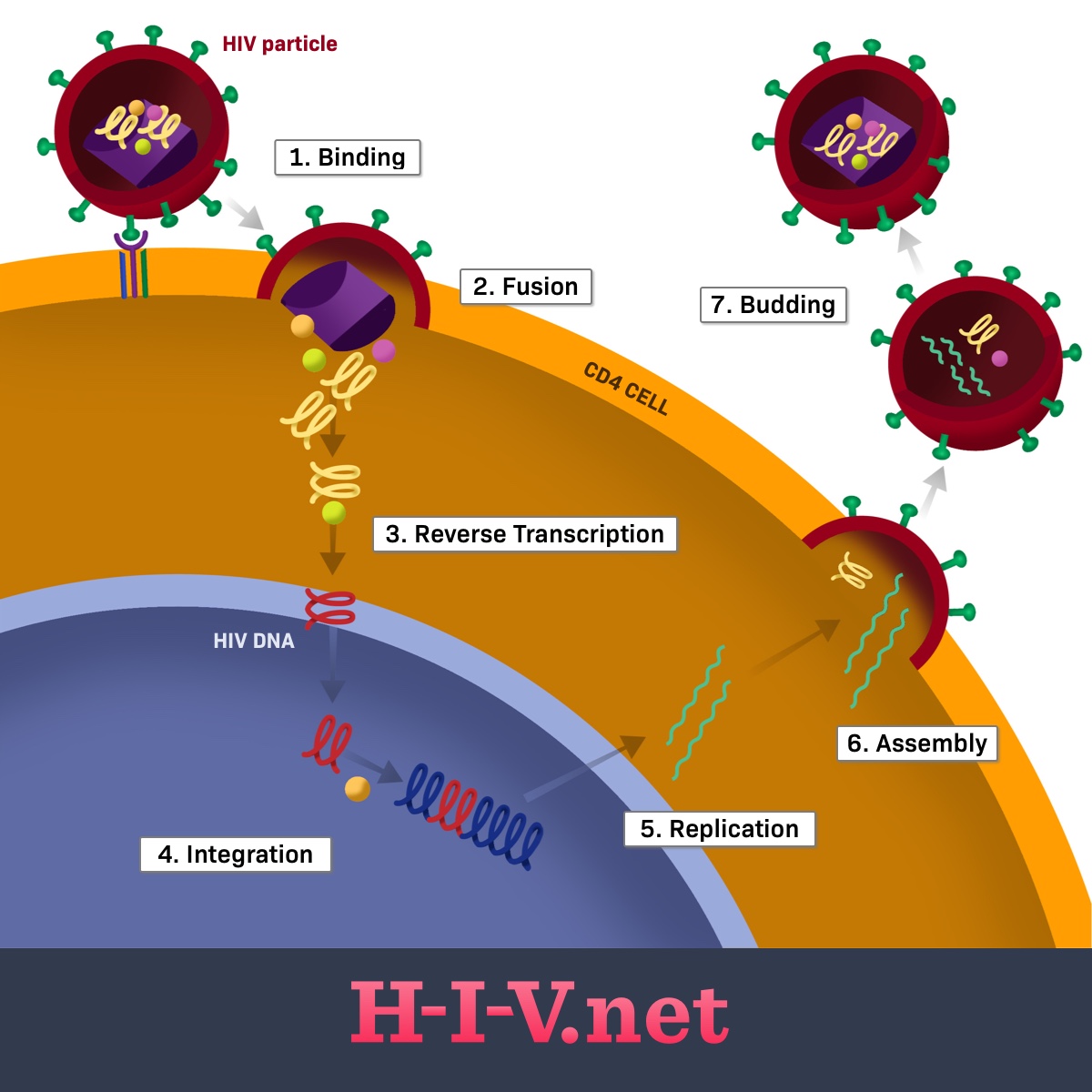 Normally in our cells, our body converts the information in our DNA to RNA (also called transcription) and then RNA to proteins. HIV is able to go backwards through this process to become DNA through a process called reverse transcription. HIV carries around a special enzyme called reverse transcriptase, which allows it to move backwards from RNA to DNA and insert into the host cell’s DNA so that it can continue to be replicated in its original form with the rest of our normal DNA (steps 3, 4, and 5; reverse transcription, integration, replication). This special property of HIV is why it is classified as a retrovirus.5

HIV will also hijack other aspects of the host cell to make new proteins for itself. These proteins and the newly replicated HIV genetic material get reassembled into whole virions again and get released from the host cell to continue on and infect more cells (steps 6 and 7; assembly, budding).5 Once our body realizes we are infected with HIV, it will begin to make antibodies against the virus. This is part of the normal immune response when our body tries to fight off foreign invaders. These antibodies may take a couple of weeks to form and be detected in the blood. This process is called seroconversion, and levels of these new antibodies can be used to help diagnose HIV.6,7

The most advanced stage of HIV is called AIDS (acquired immunodeficiency syndrome) and is defined as having a CD4 count of less than 200 (a specific type of immune cell) or one of the many AIDS-defining illnesses, like invasive cervical cancer, or Pneumocystis Pneumonia (PCP), among others.8 HIV’s progression to aids can be prevented by regular treatment with antiretroviral therapy (ART).

The progression to AIDS can vary greatly from person to person and may take anywhere from two to twenty years. Individuals with AIDS are very susceptible to infections and other health conditions, including ones that might not affect those with a normally functioning immune system. These are called opportunistic infections since they infect only those with weakened immune systems.8