Determining the true number of individuals with HIV (human immunodeficiency virus) and the number of new infections each year can be difficult. Some people with HIV do not know they have the virus, because symptoms can sometimes take years to arise.

Although these numbers may be challenging to predict, both in the United States and worldwide, large organizations like the Centers for Disease Control and Prevention (CDC), the World Health Organization (WHO), and more, work to provide accurate information on HIV.

HIV in the United States

It has been estimated that roughly 1.1 million Americans are living with HIV, and about 15 percent are unaware of their status (have not yet been diagnosed).1,2 This number is even higher for specific age groups. For example, 51 percent of Americans with HIV between the ages of 13 and 24 are unaware they have the condition.1

In 2017, there were over 38,000 new diagnoses of HIV, and it has been estimated that about the same number of individuals were newly infected during this time.1,2 When thinking about HIV statistics, it’s important to remember that those who are diagnosed each year may have had the virus for some time and not known, and those who are newly infected may not get diagnosed right away.

Of those with HIV in America (both diagnosed and undiagnosed), over 60 percent are receiving some form of care for their HIV. About 50 percent of those living with HIV in America are engaged in continuous HIV care and 51 percent are virally suppressed. When an individual with HIV achieves viral suppression, their risk of transmitting the virus is virtually zero and their overall health may improve.1,2 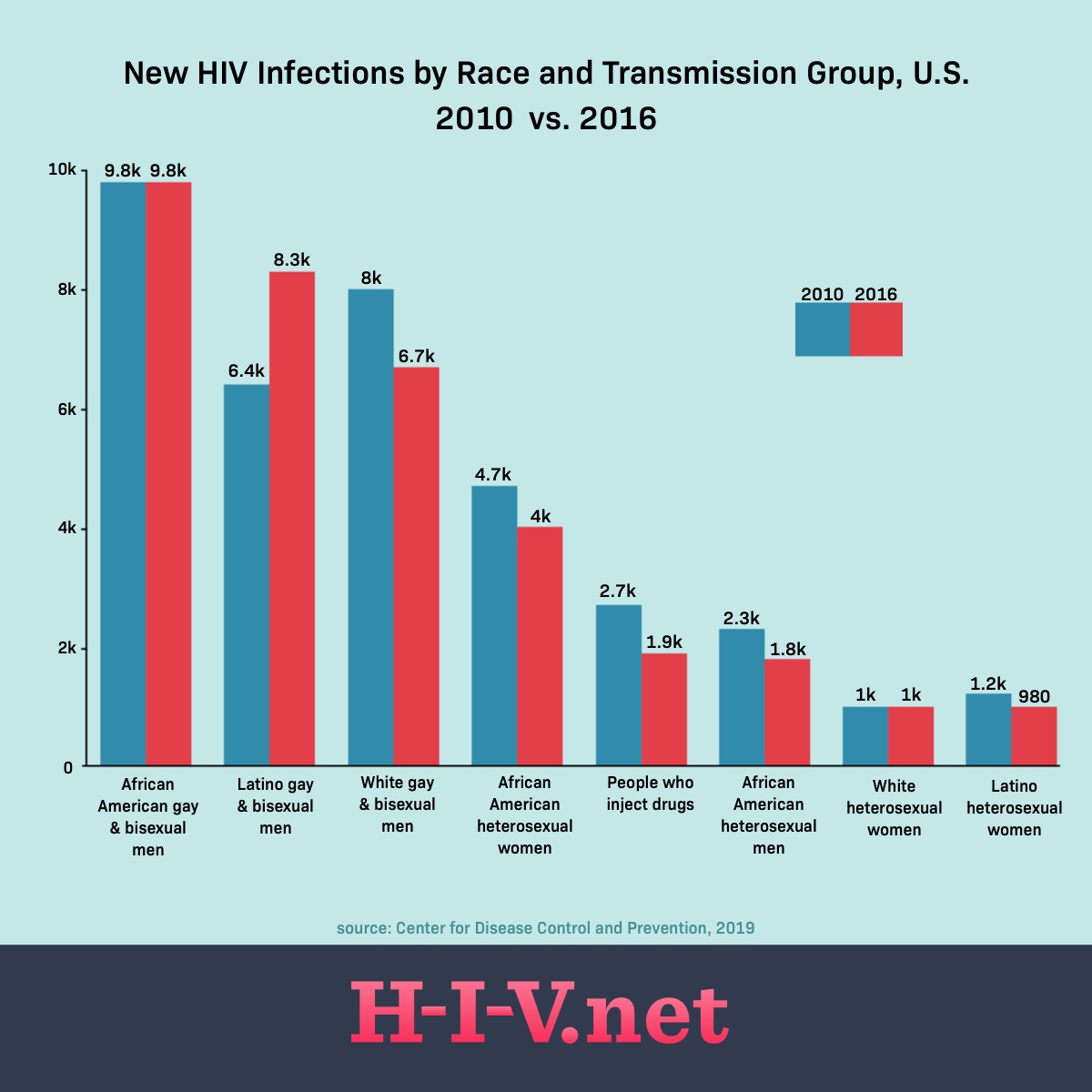 However, when considering new HIV infections amongst different groups, it’s important to remember that an individual’s risk of getting HIV is dependent on a variety of factors. Individuals from higher risk groups can engage in behaviors that reduce their risk of getting or transmitting the virus, just like those in lower risk groups can avoid these behaviors and increase their chances of getting the virus (such as sharing needles or having unprotected sex).

Just like with new infections, new diagnoses are most common in gay and bisexual men, or other men who have sex with men. This group made up 66 percent of all new diagnoses in 2017, and 82 percent of all male diagnoses. Of this group, African American men were the most commonly diagnosed, followed by Hispanic and Latino men, and white men. Also, similar to new infections, gay and bisexual Hispanic or Latino men were the main demographic group to experience an increase in new diagnoses. About a quarter of 2017 HIV diagnoses were in heterosexual individuals. Overall, about 43 percent of those who were newly diagnosed in America in 2017 were African American, and 26 percent were Hispanic or Latino.1,2

Figure 2. Number of new HIV diagnoses in the United States 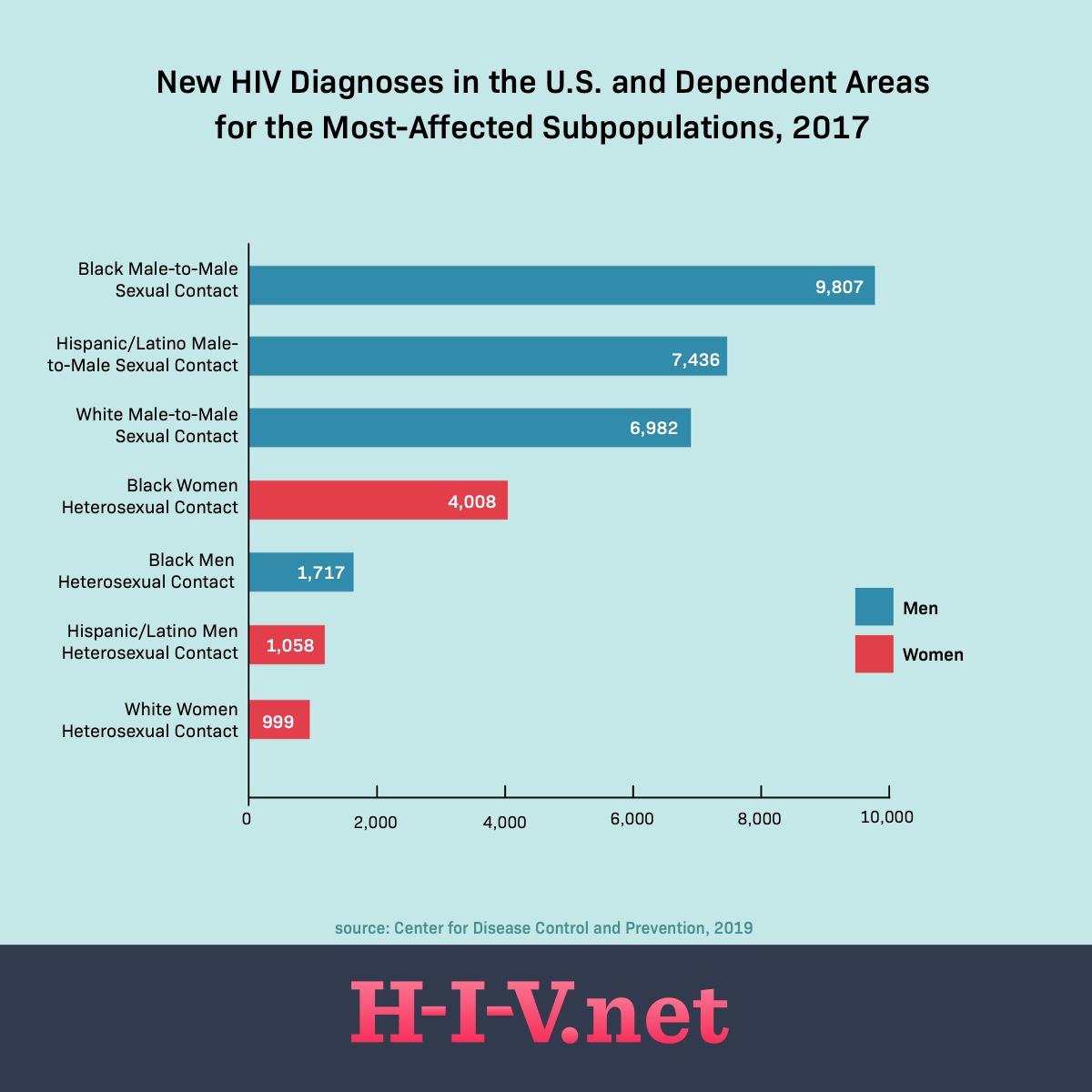 HIV around the world

Beyond the United States, HIV is a global concern. The World Health Organization (WHO) estimates that nearly 37 million people are living with HIV across the world, with nearly 26 million of these individuals residing in Africa. Beyond Africa, the WHO estimates that Southeast Asia has about 3.5 million individuals living with HIV, the Americas have 3.4 million, and Europe has 2.3 million living with the virus.5 Of the nearly 37 million with HIV worldwide, about 21.7 million are thought to be taking antiretroviral therapy (ART) to suppress their HIV, and only 75 percent are thought to be aware of their HIV status.5,6 Roughly 1.8 million children are living with HIV across the globe, with the highest concentration of these cases being in sub-Saharan Africa.7

In 2017, there were an estimated 1.8 million people newly infected with HIV, with 1.2 million of these coming from Africa, followed by 160,000 in the Americas, and the same amount in both South East Asia and Europe. However, the number of newly infected is currently on the decline. It was estimated that 2.8 million were infected in 2000, and the WHO has a goal of reducing the number of new infections to less than 200,000 worldwide by 2030.8,9

Just like the number of new infections fell between 2000 and 2017, the number of deaths from HIV-related causes decreased by 38 percent as well. It has been estimated that antiretroviral therapy (ART) for HIV has saved the lives of more than 11 million individuals.6

AIDS in the United States

The most advanced stage of HIV is called AIDS (acquired immunodeficiency syndrome), and is defined as having a CD4 count of less than 200 (a specific type of immune cell) or one of the many AIDS-defining illness, like invasive cervical cancer, or Pneumocystis Pneumonia (PCP), among others.10 Close to 18,000 individuals in the United States received an AIDS diagnosis in 2017, and in 2016, nearly 16,000 individuals with HIV died, although the cause of these deaths may be due to a variety of factors, including non-HIV related causes.1

Across the world, AIDS-related death hit its peak in 2004, and has been declining since. In 2017, it was estimated that 930,000 individuals had AIDS-related mortality, compared to 1.9 million in 2004.7 The creation of ART has dramatically changed the prognosis of HIV.

How to Improve Bone Health